So this girl walks into the West Street Wine Bar in Reno, Nevada, and orders a wine. And then becomes a digital wine leader, with an award-winning talent for bringing wine knowledge and skills together.

The girl was Madeline Puckette, a 25-year-old graphic designer. The bar’s owner, noticing her interest in wine, handed her two wine books and told her that if she could read them in a week, she’d get a job. “I read them in a weekend,” says Puckette. Soon, she had the wine bug. “I was very excited to do more,” she admits. “I really wanted to move to New York and work from there.”

Things didn’t quite work out that way. Puckette and her life partner Justin Hammack are now based in Seattle, where they run Wine Folly, a website-cum-blog-cum-graphic design business that’s introducing wine to a Millennial audience the digital way – with lots of visuals. 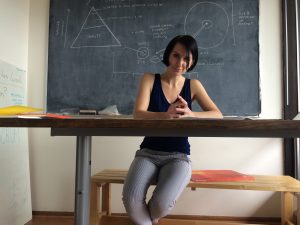 When a job came up at LVMH in New York, it seemed the perfect opportunity. But to be in the running, Puckette needed to pass the Court of Master Sommeliers exam, held in Seattle. After the exam, when she was sitting with the other candidates in the Columbia Tower Club, at the top of the tallest building in the city, she “drank Washington Riesling and Syrah while looking out over Seattle on a beautiful day in late April.” And she suddenly wondered why she wanted to move to New York so badly, when everything she wanted was right there in front of her.

Although she passed the exam, Puckette convinced Hammack to relocate to Seattle, which she describes as the smartest move she ever made. “I think if I had started getting into wine in a bigger city, I may have given up early,” she says. “It was – and is – a very competitive business.”

It was 2010 and Puckette quickly found a job as an assistant sommelier. Seattle is one of the fastest-growing cities in the US, known for its jazz culture, hipster vibe and coffee culture, and for being the home of Starbucks, Amazon and Microsoft. It’s a city where people can start something, fail, and get up and start something all over again – as Hammack and Puckette discovered, when an Internet startup on which they worked failed to catch on.

Puckette, who had loved using her graphic design skills on the project, was finding that her sommelier job wasn’t as fulfilling as she had hoped.  She decided to try and make wine work on the Internet.

“Wine Folly started as a blog,” she says. “The goal was to write about wine to help people learn and we’d offer a wine subscription for revenue. The wine subscription never took off, but people loved the content.” In particular, their audience responded to an infographic called ‘How to Choose Wine’, released in February 2012. “I was out of town and called Justin to post it up for sale as a poster. In two days we made about 50 sales before I had found a printer to make them!” Wine Folly was in business. 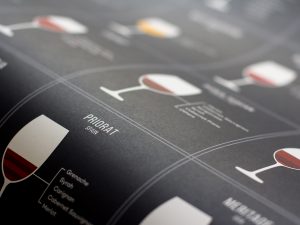 The term ‘infographic’ simply means the art of representing complex information in an easy-to-grasp visual; the iconic map of the London underground is an infographic. Modern software allows elegant infographics covering a wide range of subjects to be created and shared easily on social media. Infographics have become widespread in recent years, because they’ve been embraced by scientists and journalists.

They are, Puckette realised, the perfect way to communicate a subject as complex as wine. Wine Folly began taking on projects, including for large clients such as Wines of Rioja, which eventually allowed Puckette to work on the business full time.

Like many digital businesses, she exploits the ‘freemium’ business strategy, giving away much of what she produces to build her brand and show proof of concept. “Because it’s an open resource, it has become invaluable to many different individuals, from wine schools to enthusiasts who just want to learn,” she says. At present, Wine Folly sells not only its own posters and visual guides, but also accessories such as decanters and wine fridges; the ultimate goal is to develop revenue through partnerships and premium products, as well as through communication tools.  “Wine businesses are looking for ways to use their marketing budget to get people into new varietals, and we think we can help them communicate.”

Digital graphics and online videos may work in Seattle, the epicentre of cool. But how could such an approach benefit conservative Old World producers? “Wine is an artisan trade that can’t be done in a mechanised way on the Internet,” Puckette agrees. “However, it’s disappointing when a wine company thinks they can’t make their business on the Internet. This is how people communicate today. Instead, I see a lot of wine businesses hire a marketing company that doesn’t know what it’s doing and doesn’t really understand the vision of the business.” Puckette says such companies end up wasting money, and all because they wouldn’t take the time to learn a new way of communicating – and that this has consequences. “The topic of ‘wine’ on the Internet has been in a slow downward trend since 2005, which tells you that the young generations are not as curious as they were back then,” she warns. “This makes me concerned about all of us together,” because the wine trade has taken too long to learn how to do business digitally and “other beverages have left us behind”.

How to speak digital

“Younger folks like me are keen on clean information,” she says. “The more you give, the more interested they are.”

Puckette has another piece of advice for wine communicators: stop being dishonest.  “Unfortunately, the taste descriptions I read are usually stretched far from the truth unless they’re written by an unbiased reviewer. ‘This tastes like blueberries and raspberries and vanilla’ and you’re like ‘this tastes like cherry cough syrup and tar’. If wineries were more honest, that would be OK. People just want to know what they’re getting into.”

Being entertaining is also important, which she speculates may be because of the rise of reality television. “The more weird, strange or off-putting, the better. People are really interested in what’s going on. They want the bad news as well as the good news. People love characters.”

But wine communication eventually has to come back to the wine itself, regardless of how interesting (or boring) the person who made it is. How do you explain the complexities of wine to a lay audience with a short attention span?

Being visual helps, though it has to be entertaining. “When I showed people how to open a bottle of Champagne safely in a video, people didn’t watch it,” she says. Their video showing Champagne being sabered with a spoon, however, became one of Wine Folly’s most watched videos. Puckette extended its reach further by taking screen shots of it and using them for a successful ‘how to’ picture article.

“Everything that relates to something that’s not wine generally works,” says Puckette. For example, relating a wine to a first date works much better than relating it to another wine. Talking about ‘Bordeaux blends’ won’t work, because most casual consumers in the US don’t know what Bordeaux is. Analogies always trump geekiness. “Do you know how turbo cars work?” she asks. “Basically, there is a hairdryer blowing air into your engine, which increases the total air-to-fuel ratio and you get more power. So what’s the hairdryer analogy to your wine story?”

The danger, she admits, lies in getting too bound up in the subject. “Sometimes, I’ll write a detailed summary on different clonal selections or something like that,” she says, admitting that the piece then “gets a lot of yawns. I would do better by relating clonal selections to different kinds of tomatoes, so people can relate to it.”

This approach has worked for Puckette, who in 2013 took home the International Wine & Spirits Competition Wine Blogger of the Year trophy. And the company is still evolving, working on wine events, and educational tools and marketing tools for the trade.

“If you read any entrepreneurial book, they all say that there’s no substitute for marketing,” she says. “You are your business’s best marketer, because you know where you are and where you ultimately want to go.”