When Rutherglen fortified wines age, they look like syrup in the glass – golden syrup, liquid toffee, molasses. And when producers from Rutherglen came together to host a tasting at All Saints Estate of some of their rarest and oldest wines, the air became perfumed with figs, raisins, golden syrup and honey, with some surprisingly fresh floral notes as well. On the table were the finest examples of the fortified wines that once represented 80% of Australia’s consumption. But a combination of crashing sales to less than 5% of the market, coupled with pressure from the European Union to stop using protected names like ‘port’, ‘tokay’ and ‘muscat’ forced these wines to reinvent themselves: Rutherglen producers created a classification that not only streamlines the wines, but helps to showcase their unique qualities.

Rutherglen is a tiny town in north-eastern Victoria, whose main street boasts a handful of colonial-era buildings, complete with wrought-iron balconies. Some of the buildings look suspiciously like old fashioned banks – which is exactly what they were, created to hold gold nuggets. In the 1850s, a gold rush brought a stampede of miners, get-rich-quick schemers and opportunists to Rutherglen. It was a rough place, where men outnumbered the women 20 to one, but it quickly became prosperous, and the wines coming out of the newly established wineries found a ready audience.

By the 1879s Rutherglen and nearby Glenrowan had become the biggest winemaking regions in Victoria — if not in Australia. The government made so much money from associated taxes that they gave grants for vine planting, and vineyards spread. After the railroad connected Rutherglen to Melbourne, the wine industry boomed. By the 1890s, Rutherglen was supplying one quarter of Australia’s wines, often from wineries that still had dirt floors. Given that the wines had to be stable and able to be transported they were, not surprisingly, mostly fortified. Unfortunately, many of these winemakers – often ex-miners – didn’t really know what they were doing, leading to a decline in Rutherglen’s reputation.

But worse was to come. It’s a truth locally acknowledged that every Australian wine boom must be followed by a major disaster:

“… as another writer records, “The Phylloxera vastatrix was first found in Victoria by Mr. Henry King in his vineyard at Geelong on the 8th November, 1877”. It was a Thursday. The hour of the day was not noted. From there it moved inexorably through the North East, taking about twenty years to reach the Murray, which is about two hundred yards a day.”

Benwell added: “No one is quite certain how or where the disease first appeared, but like a number of world troubles we have chosen to blame it on the Americans…”

Vines were uprooted and burnt and Rutherglen was never again a major wine region, though the wine regularly enjoyed a resurgence, particularly in the 1920s and 1960s.

Post-war Italian migrants had brought their love of table wines to Australia and so precipitous was the drop in fortified consumption that by the early 1980s, Rutherglen producers realised the style faced extinction. So the newly formed Muscat of Rutherglen Network hit on the idea of a rebrand. Instead of calling their wines ‘port’, as fortifieds were called in those days, they’d develop a four-tiered local classification system: Rutherglen Muscat, Classic Muscat, Grand Rutherglen Muscat and Rare Rutherglen Muscat. The wines were taken out of flagons and relaunched in 37-ml bottles.

In 2005 the use of the term ‘Tokay’ – and ‘Sherry’ – had to be dropped because of a bilateral trading agreement with the EU, so the names Topaque and Apera were adopted.

“It’s important to remember what the classification does and doesn’t do,” explains Dan Crane, winemaker at All Saints Estate. “What it doesn’t do is tell us how much we can charge, or the bottle format. You can have additional names on top.” So, for example, Campbells of Rutherglen name their Rare Rutherglen Tokay the ‘Isabella’. But Crane says the classification does outline the kind of characters each level should have. “Rutherglen should have freshness of fruit, with no overt wood-aged characters.” He says the Classic is “perfectly named, because it’s what people expect from an entry-level Muscat or Topaque. Then you’re through to the Grands and the Rares, where you’re looking at far more aged characters, with much more complexity and depth.” The Rares are “seriously old wines, with seriously old components.”

As for how they’re made, Crane says that some wineries work on a strict solera system and some work with a modified solera system. “It’s all to do with style.” He adds that the group does a regular classification tasting between themselves, to ensure that the classification is being maintained stylistically. “It’s self policing,” he says. “There should be daylight between the youngest-looking Classic and the oldest Grand.”

Jen Pfeiffer from Pfeiffer Wines explains that Rutherglen has two different soil types: sandy alluvial soils on river gravels and red loam over limestone. The first produces lighter and more aromatic wines, while the latter offers higher levels of ripeness. “Rutherglen is a warm climate with an average January temperature of around 29 to 30 degrees, with long sunshine hours,” she says, leading to hand picking of vines “because we have high levels of raisining and we’re worried we will lose those through machine harvesting.”

As the tasting progresses, Crane calls attention to the building where the tasting is taking place, an old shed behind the All Saints Estate winery. “I want to talk about terroir and how it’s expressed in these wines,” he says. “There are solera wines that can spend 100 years in these buildings and the buildings themselves are so important for the way the wines turn out.” When the first wineries were built in the 1860s and 1870s, he explains, Rutherglen was “the arse end of the world and a long way from anywhere. Anything you brought in cost a lot of money.” The lack of cheap building
materials means most of the older wineries are just tin sheds with dirt floors. “In the
middle of summer, it gets 50 to 55 degrees in the barrel sheds,” says Crane. “In winter you’ll hear me swearing because it’s so cold. The wine isn’t just 40 years old, it’s spent 40 years in a building that’s getting a dramatic shift from winter to summer.”

There is a lot of evaporation thanks to the hot summers and then the wines suffer chilling in winter. These storage conditions help to create the house style. 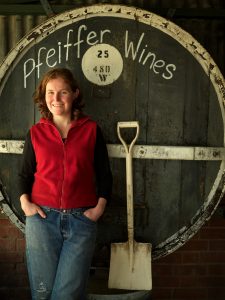 Inside Australia, Rutherglen fortifieds are considered national treasures. International critics agree how important they are: more than a few Rutherglen cellar doors use signs to advertise that Robert Parker has awarded a wine 100 points. “These wines really are some of the most extraordinary in the world, and nowhere else has the vine stocks and arid climate to grow and mature anything like them,” wrote UK critic Jancis Robinson.

Overall, however, fortified sales have flatlined since the 1980s, and represent less than 5% of the domestic market. But winemakers say that Rutherglen has been able to capture more of the market, as wine producers elsewhere in Australia have vacated the fortified caegory. Colin Campbell of Campbells Wines says that the past six months have seen a downturn in mid-tier Muscat and Topaque wines, while entry-level and super premium sales remain strong.

As for the export markets, winemakers tell of 400 cases here, to 500 cases there, with traditional markets hit hard by the strong Australian dollar. “We’ve been in Sweden, Denmark and Belgium,” says Steven Chambers from Chambers Rosewood Winery. “Belgium and the UK took a hit for a while, but the places that really disappeared were Hong Kong and Singapore.” 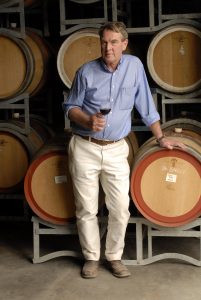 Jones Winey & Vineyard is a living piece of Australian history, its brick winery topped by a corrugated iron roof and its bark hut – now used as a café – held up by rough timber posts. Jones also has the distinction of being the place where Phylloxera was found. Winemaker Mandy Jones points in the direction of the hay shed. “It was discovered over there,” she says. Jones and colleague Simon Killeen, from Stanton & Killeen are presenting the other side of Rutherglen – its table wines. While new varietals such as Fiano are being introduced into the area, Rutherglen is best known for its Durif, the red known as Petit Sirah in the US.

Durif is another consequence of Phylloxera. As thousands of vineyard hectares were pulled up and growers left the industry, the region faced collapse. In 1908 the Victorian state government appointed Francois de Castella – who’d done a study tour of Europe – as the official viticulture expert, with the aim of reviving the region. De Castella introduced vine grafting onto American rootstocks, and suggested an eclectic array of varietals – which is why the region has so many today. One turned out to be a defining choice.

Developed in France, Durif is a hybrid of fleshy-berried Shiraz with tight-bunched Peloursin, giving it big berries in a tight bunch. If it rains at the wrong time, the grapes will split. If it completes its growing cycle, it produces wines that regularly hit 15% abv and 16% abv. A difficult variety, Rutherglen was one of the few places in the world to plant it, and perhaps wouldn’t have done so under other circumstances. But the grape flourished, giving Rutherglen another point of interest.

“You get a lot of violets and also a grainy and long tannin structure,” says Killeen.

Durif faces challenges too, being a big, rich wine, at a time when Australian wine show judges are actively rewarding elegance and lower alcohols, and consumers are embracing Old World styles. But Rutherglen has faced worse things than the dictates of fashion in its time. The ups and downs have taught producers that their best hope lies in working together: they have a tradition of promoting each others’ wines, tasting together to improve the overall quality, and developing successful food and wines festivals. That, Rutherglen’s picturesque colonial architecture, and amenities like the transformation of the old railway tracks into a bike trail, have made the region a major tourist destination for food and wine lovers. And if all else failed, the winemakers could turn to new extraction techniques to remove the gold that’s still under the soil.

But that’s unlikely, because the vines are too highly valued.