Looking at the diamonds in Percy Marks is a lot like viewing Sydney real estate – fabulous prices quickly become unremarkable. Take the tiny pink diamond that proprietor Cameron Marks removes from behind glass, priced at $139,000. The $20,000 diamond solitaire that Marks shows next seems like a steal in comparison.

The question is, are any of these gems worth buying? As any financial adviser will tell you, a diamond is generally a bad investment, for two main reasons. The first is that there is no secondary market for diamonds, as there is for gold; the second is that it’s very difficult for an ordinary person to buy diamonds at wholesale, which means having to buy diamonds that have hefty retail markups attached to them.

Having said that, there are circumstances in which a diamond will not only hold its value, but will improve in the long term.

The value of a diamond can be summed up in four words: colour, cut, carat and clarity.

The word ‘colour’ has two meanings when talking about diamonds. The first, paradoxically, refers to a lack of colour; until comparatively recently, the most sought-after diamonds were the most transparent. Diamonds are graded alphabetically, so ‘D’ represents flawless clear diamonds, while ‘I’ has a tinge of yellow.

The second use of colour refers to actual colour. Some diamonds are naturally pink, blue, yellow or browns and these ‘fancy colours’, as they’re known, are in hot demand.

The world’s rarest diamonds – from Australia’s Argyle mines – are pink. So desirable are they, that they retain their value even when the stones are inflected with brownish tints. Holloway says they’re so valuable that they have poor liquidity, in the same way that a yacht or private jet is difficult to sell quickly. Nevertheless, he advises that if you want to invest in diamonds, buy a pink one.

“Argyle is going to stop open-cut mining because they’ve reached the limit,” he says. “The supply of pink diamonds will not be regular in the near future.”

That’s because the Argyle mine, located in the Kimberley region in Western Australia, has almost exhausted its pink diamond deposit. Production will cease altogether some time in the next ten years, if not before. Since the mine accounts for about 90% of the world’s supply, that means the value of these stones can only rise.

The other three Cs

No matter what the colour, the diamond’s value will be enhanced or damaged by how well it’s cut. While most diamonds are still cut in traditional shapes – baguette, emerald, oval, pear and so on – new cuts have recently appeared, because designers seeking to stand out in the market are creating their own shapes.

Holloway warns against buying branded cuts, saying they’re a marketing ploy by diamond companies wanting to retain market share. He says ‘brand’ cuts range between “slightly inferior and appallingly atrocious”. So avoid any diamond whose is named for a jewelry store or designer.

Holloway suggests the cut most able to hold its value is the round brilliant. “It sparkles the most,” says Holloway. He adds that diamond laboratories have been listing the cut quality grading on their certificates since 2005, so make sure you ask for it.

The fewer inclusions and blemishes the diamond has – or the better its clarity – the higher its value. The highest clarity grading is Flawless (FL), followed by Internally Flawless (IF).

Colour can, however, be more important than clarity, particularly when it comes to fancy colours that are rare, such as the pink.

Size, on the other hand, nearly always matters. The standard unit of weight for diamonds is the carat and prices increase rapidly once diamonds reach one carat. Add to that the current craze for flashy stones of two carats or more, and you can see it pays to get the biggest rock you can.

Like every rule, this one has exceptions, as Peter Gerrard, President of the Gemmological Association of Australia illustrates by putting two diamonds on his desk. One is clear and flashes as it catches the light. The other is duller and appears smaller. It’s an optical illusion – the bright diamond is actually the small one and in this case its cut makes it a better buy.

“How well a stone is cut can make a 30 to 40 per cent difference,” says Gerrard. He notes, however, that there are many small diamonds on the market and few large ones, so bigger sizes are usually a better investment. Demand for large stones is high and may well outstrip supply in the years ahead. This is good news for anybody who has an engagement ring coming their way: tell your partner that buying a whopper of a rock makes good financial sense, as well as being a sign of true love.

How and where to buy

Diamonds are traded internationally in US dollars, so buy whenever the dollar is weak, or your local currency is strong.

That said, there are few bargains to be had. The cost of your diamond will include both local sales taxes and a retail mark-up. If you buy branded jewellery from somewhere like Tiffanys, you’ll also be paying a brand name premium.

And if you’re buying at the high end – $100,000 or more – you won’t find the best stones at your local jewellery store. For these you need to go to places like Melbourne’s Precious Metals or Sydney’s Percy Marks. They have contacts all over the world, which allow them to source special requests.

But would you would be better flying to Antwerp, the gem capital of the world?

“No,” says Marks. “You won’t get a good deal.” He says he’s seen people try that who end up paying far more than they would have if they’d bought locally, because they don’t have the relationships they need with gem merchants.

Another way to acquire diamonds is through auction, where they can be bought for around a third of their retail value.

“We guarantee everything in our catalogue,” says Sotheby’s Irene Travers, a qualified gemmologist. She adds that most vendors normally have certification. “We only accept certificates from the GIA [Gem Institute of America] or the Gem Studies Laboratory.”

What about vintage bling?

Travers cautions against buying antique jewellery for the diamonds. “Jewellers worked with the stones available at the time,” she says. “You wouldn’t find top quality stones in antique pieces.” Travers says that it’s not until the Edwardian and Art Deco period that gemstones began to be cut better.

While auctioneers can only approximate the value of a stone, Travers says that buyers may sometimes be in for a nice surprise. A stone in a bezel setting, for example, is hard to judge, because you can’t see its underside. But when the stone is removed from the setting, it may be a brilliant, clear stone.

If you’re serious about investing in diamonds, Marks suggests buying a pair or a set. He says that matching diamonds is hard, so a pair of well-matched diamond earrings or a diamond bracelet will be worth more than the sum of the individual stones.

Marks also advises that buying signed jewellery can be a very good investment, and lists jewellery which has appreciated: “Van Cleef and Arpels, Bulgari, some Cartier,” he says.

Any diamond that sells for more than $5,000 should come with certification from a major organisation like the Gem Institute of America or Gem Studies Laboratory. You will need this to re-sell your diamond.

Marks’ final piece of advice is that Australians like simpler jewellery. “If it’s a complicated piece, sell it in London or Geneva,” he says.

Which raises questions about the huge green diamond ring sitting in one of his cases. The ostentatious stone is surrounded by dozens of smaller white diamonds. This, it turns out, isn’t an ordinary diamond. Marks lifts it from its case.

“It’s been irradiated,” he says.

And just which jewellers have access to nuclear reactors?

“The Russians,” he says. 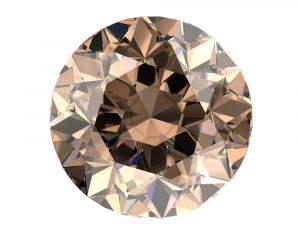 A note about conflict diamonds

‘Blood’ or ‘conflict’ diamonds are those from war-torn areas in Africa which are illegally traded. They’re often mined by slaves or forced labour, who face severe penalties (death, amputation) if they don’t follow orders. The profit from these diamonds is used to fund further conflict, or other crimes.

In 2003, the UN Security Council created the Kimberley Process, a system meant to guarantee conflict-free diamonds. Basically, diamonds should be certified before they leave their country of origin. Since 2003, many major companies have gone out of their way to prove they’re not selling blood diamonds – Tiffany’s, for example, only uses diamonds from its own mines.

However, conflict diamonds are much cheaper than ethically-sourced diamonds, and so are still in circulation. The best way to avoid them is to buy from companies or dealers who have a clear policy on the matter.