Dr Richard Smart, the renowned Australian viticulturalist, pulls no punches. “You know what’s missing from this conference?” he said, during one coffee break. Dr Smart had just delivered a startling talk at February’s Climate Change and Wine conference. In that talk – which caused many members of the audience to lean forward, frowning, as they tried to decipher his thick Australian accent – Dr Smart outlined the threat that global warming poses. His speech was widely reported, not least because of Dr Smart’s contention that rising temperatures could mean that Bordeaux’s best vintages were now behind it. With more than 300 delegates attending the conference, including reporters from major media, there could be no doubt that the wine industry takes global warming very, very seriously. Yet Dr Smart thinks the global wine industry needs to go further. “What we need is an action plan,” he said. “Otherwise it’s all just talk.”

Climate change brings a multitude of problems. There’s the impact on the vineyard, the issue of water scarcity, and the carbon generated by wine production to consider. But the wine industry is showing agricultural leadership when it comes to dealing with global warming—with the New World leading the way. 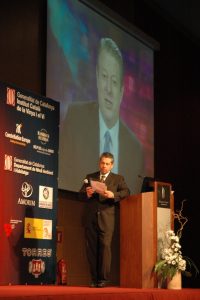 Pancho Campo in front of a video feed from Al Gore

The scale of the problem

All too often, discussion of climate change can verge on the apocalyptic, with a focus on what might happen at some time in the future. But what the Barcelona conference demonstrated clearly is that the impacts of climate change are being felt now. For some wine makers, this has been good news. Dr Ernst Loosen, the famous Riesling maker from Germany’s Mosel Valley, says there was a time when he only saw three good vintages in a decade. “Now, thank God, we ripen every vintage.”

Yet this ripeness has come at a cost, as the wine style for which the area is famous is vanishing. “Now we see overripe vintages,” he said. “We have had people showing wines with 15% alcohol. I hate them. I want to keep these light, delicate wines.”

If the experts are to be believed, centuries of carefully-built up knowledge about some of the world’s most famous wine styles will soon be obsolete as changing weather impacts on growing conditions. “Wines will become more alcoholic. Some red wines may lose colour. Some will lose varietal character,” said Dr Smart. That’s on top of a drop in acidity and a loss of aroma.

For some vignerons, a change in grape taste will be the least of their worries, as they struggle to cope with vastly changed growing conditions. “All the models are showing drought in south America, the Mediterranean and Australia,” said Bernard Seguin of the INRA, France’s agricultural research body. “Many things will become difficult – catastrophic, possibly – if we do not prevent warming.”

Some of the future problems he listed included shorter plant cycles and a heightened risk of frost. That’s not the only bad news: land available for viticulture in Australia and California will shrink; cherished varieties like Pinot Noir will no longer flourish in Burgundy; and parasites like the multicoloured Asian lady beetle will move into new areas.

Some European companies are already taking drastic action to limit the damage; legendary Spanish winemaker Miguel Torres, whose family has made wine in the Catalonia region for three centuries, says he is moving some vineyards to the cooler mountain areas. But, as other speakers pointed out, this solution’s unrealistic for most producers. Not only is it financially and practically impossible to move whole communities, it would destroy the whole notion of terroir, or sense of place, that makes wine what it is. Sadly, according to climatologist Gregory Jones of Southern Oregon University, terroir is no longer a given. Bordeaux’s temperature, for example, is set to rise 1.2C by mid-century, giving it a North African-like climate.

Not everybody was gloomy. Stephen Skelton MW, who initially got a laugh when he announced he was going to talk about English wine, said global warming had helped England’s fledgling industry to produce award-winning sparkling wines. Other wine areas to benefit from climate change, according to Dr Smart, will be northern China, Belgium, Denmark and eastern Europe. Southern hemisphere countries like Chile and some of the cooler areas of Australia will also be winners, thanks to the effects of ocean currents and the fact that they have coastal and mountain areas that can still be exploited. And there are steps that can be taken to limit damage, such as switching to different grapes, or reorienting vine rows, so the grapes are less exposed to the sun.

Even so, it’s clear that global warming is the biggest challenge faced by the wine community since the Phylloxera epidemic. But, as Al Gore said at the end of the conference, the wine industry is showing unique leadership on the issue.

Since the middle of this decade, wine producers have faced pressure from regulators, retailers and consumers, to account both for its environmental friendliness and its greenhouse gas emissions. For New Zealand, a turning point came when the subject of ‘food miles’ was raised and agricultural bodies scrambled to calculate their carbon footprints. But they discovered some good news: in a study done by Lincoln University in New Zealand, it turned out that even when shipping to Britain was included in the calculation, New Zealanders were so efficient that the energy used to produce lamb in Britain was four times higher than in NZ, while for apple production it was three times higher.

Around the same time, large Californian wineries found themselves with GHG reporting issues, thanks to the environmental leadership shown by Governor Arnold Schwarzenegger. In mid-2006 he introduced a world-first bill, the AB 32, which requires the California Air Resources Board (CARB) to develop both regulations and market mechanisms to reduce carbon levels to their 1990 levels by 2020. Mandatory caps will begin in 2012.

“Although the wine industry and most other agricultural industries are considered low producers of carbon emissions, GHG issues are becoming more significant to brands and image,” says Allison Jordan, who is both the communications programs manager for the Wine Institute of California and executive director of the California Sustainable Winegrowing Alliance. She says that along with such issues as being able to get access to retailers interested in carbon footprinting, wineries were increasingly being approached by consulting firms offering to perform GHG ‘audits’.

Similiarly, Stephen Strachan, the CEO of the Winemakers’ Federation of Australia, says that from 2005 his organisation also became increasingly aware of research done in the UK to compare the carbon footprints of wine producers in different countries. “The GHG emissions voluntarily reported by the Australian industry were found to be ten times greater than those reported by the Californian industry,” he said. The reason, he adds, is not because “there were any major differences in wine production methods, but simply because different inclusions and methods of calculation were being used when assessing the carbon footprints.”

The combined result of all this was the dawning realisation that the wine industry urgently needed a way to calculate GHG emissions. So both the Australian and New Zealand industries, along with South Africa, were very open when the Wine Institute of California declared that it was time something was done.

“The goal of the project was to provide a free, easy-to-use, wine-industry specific GHG protocol and calculator,” says Jordan. She said it became clear that if resources were pooled, the member organisations could create a cost-effective tool that would have international credibility with regulatory bodies, retailers and consumers. Negotiations focused on industry-specific aspects, such as where to draw the line around the production process, and where the draw the best emissions data from –and the Greenhouse Gas Accounting Protocol for the International Wine Industry and related Greenhouse Gas Calculator was born. A joint initiative between the Wine Institute of California, the New Zealand Winegrowers Association, the Winemakers’ Federation of Australia and South Africa’s Integrated Production of Wine program, the Protocol sets out “emission sources to be included in carbon footprint calculations,” according to Australia’s Provisor, who created the tool. “It also lists data sources and standards used in developing the tool, and provides sufficient detail to enable the methodology to be independently peer reviewed by groups such as the World Resources Institute, which administers the International Greenhouse Gas Protocol.”

Today, the Protocol and calculation tool is readily available online. Strachan says that while there is no way of measuring its usage, the WFA has been contacted by many companies, including from France and Italy who are asking for assistance with it. “The most important thing to remember is that the crux of the whole project is really the Protocol, not the calculator,” says Strachan. “A producer can use any carbon footprint calculation method they like, provided that it is shown to be in line with the GHG Accounting Protocol for the International Wine Industry.”

It’s an example of how seriously the issue is being taken, that rival industries can come together so quickly and efficiently, to create a common tool that is freely available to everyone.

The canary in the coal mine

As Al Gore said at the conference, “You [the wine industry] are providing the leadership that other industries can watch and be inspired by”.

Unfortunately, it doesn’t really matter how many grape growers and wine makers go green, because the wine industry isn’t big enough to make a global difference by itself. It will take the kind of government leadership that Californian has shown to turn things around—but the wine industry has a vested interest in governments acting to limit emissions, because viticulture is so vulnerable to climate change. As Dr Smart said, viticulture is “the canary in the coal mine of agriculture”.

The wine industry is unique: it’s a high export earner; it can drive tourism; it’s inextricably linked with history and culture in many wine producing nations; and it openly and willingly shares people, resources and information at an international level. This theoretically means that at a collective, international level, it has a lot of clout – and if it can come together so quickly to create the Protocol, maybe it can come together to lobby governments into making necessary legislative changes, to ensure the worst greenhouse gas scenarios never come to pass. And individual countries could take leadership roles on specific topics: Australia, for example, which probably knows more about the management of drought and water than any other country, has a lot to teach. Unfortunately, as Strachan admits “the Australian industry has not yet formally taken on an international leadership role in this area”. Perhaps it’s something to think about.

As Dr Smart said at the end of his talk, that the changes being observed in the vineyard, are “an early warning signal of what is to come”.
Felicity Carter

This article first appeared in Meininger’s Wine Business International in 2008.